Pondicherry will always have a special place in my heart, as it reminds me so much of home (even while traveling). Although this beach destination is a contrast from my hilly hometown (of Nagaland), the overall vibe of this small town feels pleasantly familiar to the place I grew up in. A former French colony, the local food in Pondy is an eclectic mix of French and South Indian cuisines. And thanks to Pondy friends, I was introduced to a host of cafes and bakers out there, who make the most amazing baked goodies and desserts!

On one of my Pondy food expeditions, I came across ‘Mel Whisks’ – a home-based cloud kitchen run by a sibling duo in Pondicherry. They sell mouthwatering gourmet food and desserts. I have been following their Insta page even since the lockdown happened, and have even ordered their desserts jar for my friends there, who have been raving about them ever since! So I got on a call to interview the two people behind ‘Mel Whisks’ – siblings Ayush and Rhea. We spoke about their beginnings, food on their menu, and more. Ayush & Rhea: We’re Ayush & Rhea, a sibling duo, from Pondicherry. We grew up here but eventually moved to different cities for university. Both of us ended up pursuing Hotel Management, coincidentally.

“During the lockdown last year, both of us came back home (to Pondy). It felt nice to take a break and rest, but we soon got bored out of our minds! That’s when the idea hit us, to team up and start something around food, where we shared a common interest. That’s how ‘Mel Whisks’ came into being. We started with selling desserts – but soon branched out into other food offerings like fast food, gourmet food, and some more :)”

Siblings Ayush and Rhea with their parents. Siblings Ayush and Rhea with their parents

Ayush & Rhea: We run a gourmet cloud kitchen, in the heart of Pondicherry. We make different kinds of food, ranging from Pizzas & Burgers to Khow Suey (a famous Burmese dish very popular in Pondicherry), and a range of Thai food. Our menu is a mix of different cuisines, each one served with a twist.

“We began in a small way, by selling cakes and desserts, and soon we were flooded with orders. People loved what we had in store for them, so from desserts, we branched out into other kinds of food offerings, and we’ve only been doing better ever since. We were fortunate enough to have some experience in the hotel industry (since both of us had worked earlier in that space), which came in handy.” Ayush & Rhea: The first thing we baked was our Sinful Chocolate Cake, and yes we did sell it. Initially, we didn’t get it right, and the feedback wasn’t great, but after tweaking the recipe over and over again, it’s now our bestseller :’) Ayush & Rhea: Well, we don’t exactly cook a lot, now that we’ve got a team in place.
But from time to time, we experiment with new desserts. Our Dalgona Panna Cotta was a recent experiment, that came out surprisingly well.

Rhea: I wouldn’t call it a leisure activity, but both Ayush and I love playing badminton. We’ve played professionally when we were younger, and now we play to stay fit and have fun.

Ayush & Rhea: Our current indulgence would be the Lotus Biscoff Cheesecake, hands down. We’re obsessed with it, and so are our customers.

Ayush & Rhea: Pondy has some fantastic places to treat your tastebuds. Some of our favorites would be,

Ayush & Rhea: We’re looking to expand and move out into a bigger kitchen, so hopefully, we get there by the end of the year. We’re also hoping to reach 5k followers on Instagram before we go into 2022. So, fingers crossed! :p

Follow ‘Mel Whisks’ on Instagram.For inquiries, get in touch HERE! 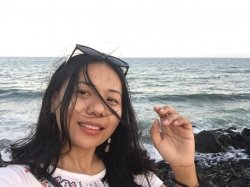