The Gutouch Cafe is a cute eaterie in Kohima Town with an aesthetic setting, adding to the ambiance of the eestaurant. The place is famous for its Galho and has been the talk of the town for awhile.

We decided to have a little chat with the founder of the restaurant, Gugu Kuotsu to get more insight on her restaurant. I am Gugu Kuotsu from Kohima. I am the founder of the Gutouch restaurant. I also have a jewelry  brand named Gutouch, which features both traditional and fusion made jewelries.

The cafe was launched just last year in the month of September 2018. Gutouch with a hint of Christmas

Well, the name of the Cafe was suggested by my friends like Mengu Suokhrie, Onent Nenty and Athe Rhi, since I already have a brand name Gutouch, a jewellery brand. My love for food and the very idea of letting people get a taste of our Naga food ultimately made me open my own restaurant.

The very speciality about Gutouch cafe is the Galho which is served in wooden plates so as to add to the authentic feel of the Restaurant and the drinks such as Ginger ale, gooseberry and Wild apple juice home made. The most special item on my menu would be the Galho, which is a sort of porridge with beef meat portions. The Galho is enjoyed by most Nagas. The drinks like the Gooseberry tea, Wild Apple Juice and Gooseberry tea are drinks which are found rarely in restaurants and also adds to the personal traditional touch of the Restaurant.

Check out their Instagram page too if you’re interested in seeing what kind of Jewelries they offer! For address and menu details, you can check our restaurant listing site HERE 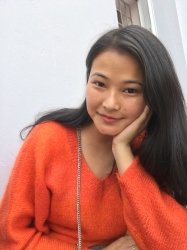 Menule Chirhah
Has a feisty palate for Food, Literature and Adventure. Likes Venturing through a food menu and reviews them on Instagram @mini_explorerr