“Love of beauty is taste. The creation of beauty is art.” this quote by Ralph Waldo Emerson is a fitting line for our young artist from Kerala – Akhila Johny. This 24-year-old artist now lives in Paris as an art student – not just in the classroom, but also as a resident of yet another new place.

At 18, her passion for art led her to Singapore and that explorer in her continues to take her places! “Through Art, I’m rediscovering how I see the world around me. Art is expression, Art is communication and in the simple moments of everyday life, I glimpse another story that is waiting to be told.“

We had a chat with Akhila Johny (who btw, is one of the sweetest people we came across), to talk about her artistic philosophies, what it means to be an art student for life and her future plans. Hello! I am a 24- year-old Artist from Kerala, India. At 18, I moved to Singapore for my Applied Art studies. Since last year I have been residing in Paris where I’m pursuing a degree in Traditional Animation.

As a young artist, I try to be versatile in terms of style, subject, and media. I feel that in this field, I will always be a student and as such, should keep my curiosity alive. Through art, I’m rediscovering how I see the world around me. Art is expression, Art is communication and in the simple moments of everyday life, I glimpse another story that is waiting to be told. Reading, travel, my teacher, and other Artists are also sources of inspiration.

The difference between Kerala and Paris is staggering. Living abroad has made me notice the subtle beauty of my homeland and my impressions of the contrasts, the traditions, the people and their way of life have become fixtures in my imagination. Currently, I am working on a series of paintings titled ‘Chitraanjali’ which portray quotidien stories from Kerala and India. I aspire to have them exhibited in Paris.”

“A flight of pigeons” from Chitranjali – Akhila Johny’s series of oils and watercolors, depicting the many faces of India. “A flight of pigeons” from Chitranjali – by Akhila Johny

Narrating the Ramayana Oils from Chitranjali – Akhila Johny’s series of oils and watercolors, depicting the many faces of India. I have been drawing for as long as I remember – encouraged by my older cousins who are artistically inclined themselves. Although I have other hobbies and interests, drawing was the one passion that I followed with the utmost effort, and art was what was most dear to me and an inseparable part of my identity. Any time I spend not creating, seems like a moment that could have been better utilized. Akhila Johny’s Art and her Tools

In my late teens, I serendipitously met one of Kerala’s most renowned artist Mahendran Vasudevan sir and started to study under him. This was a turning point for me as his mentorship and guidance played a crucial role in correcting and strengthening my understanding of the fundamentals of art as well as broadening my perspective of what art is and what it means to be an artist. Our teacher-student relationship as well as the stimulating European art scene contributes much to my development as an Artist. Oil on Canvas by Akhila Johny

Shire on the Hill by Akhila Johny. Shire on the Hill by Akhila Johny. 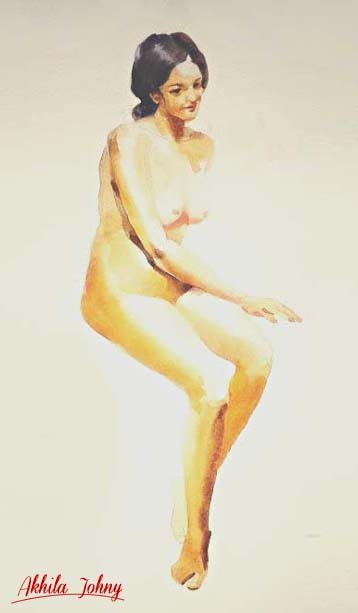 It’s difficult for me to choose one piece from among all the others as a lot of thought and effort has gone into each one. For the moment, I shall say that ‘The Reader’ has a special place in my heart.

“In Paris, I worked part-time teaching English to children. ‘The Reader’ is an intimate portrait, done in pastels, of my young charge caught in one of his rare quiet moments. It was a piece that I worked on with much affection and I believe that my bond with the child has helped me astutely capture his nature on paper.Moreover, I had visited a recent exhibition on the Impressionist painter Mary Cassatt whose tender portraits of women and children also influenced this piece.” “The Reader” Portrait by Akhila Johny

I dream of being an independent Artist, traveling the world and telling its stories through my work as well as sharing my skills by organizing workshops with others of similar interests. In the domain of Applied Art, I have illustrated for the French skincare brand Creme Simone and worked on comics for the University of Atlanta. In the same manner, I would like to collaborate with other Fine Artists, conduct exhibitions, and workshops and publish my own Art books.

One of my favorite quotes is from my favorite old master Michelangelo, “If people knew how hard I worked to get my mastery, it wouldn’t seem so wonderful at all.” It is important to understand that an artist is an eternal student and behind every master is a lifetime of practice and hard work.

“My advice to others would be to enjoy the process of creation as much as the goals we set for ourselves. It is inevitable to have disheartening days but always endeavor to overcome those by remembering how much joy the act of creation brings you. So work hard and stay curious!”